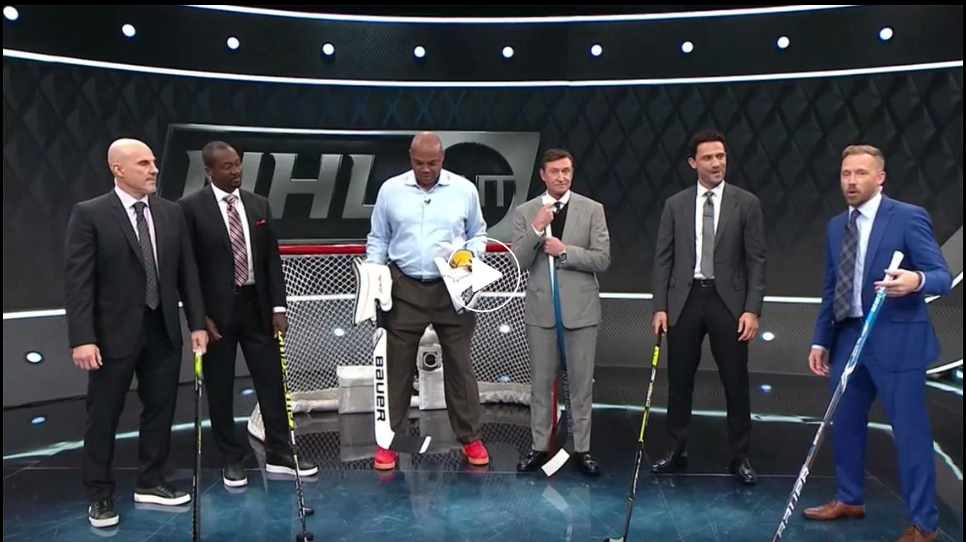 Due to the slowdown of Covid, I’ve lived on a plane and in hotels for the last several months, which has limited my ability to both tape podcasts and write blog posts. Hence the silence here. Since I am at home for a few days, here are my random thoughts about sports media and the things that make me go “hmmmm”: in no particular order:

It did not seem like a big deal to me when the NHL switched TV partners in the USA. Recently, I was in remote parts of Oregon, Georgia, and Nevada, and the NHL was available everywhere. For the first time ever, regardless of whether I was in my hotel room, a restaurant, or a bar, hockey was on TV. If it wasn’t, I asked someone to turn it on for me, and it was found instantly and on TV within seconds. The move to ESPN, TBS, and TNT from a distribution perspective has been monumental for Bettman Inc. It’s not about ratings, it’s about being able to find games.

I’m struck by how far the American networks have come in terms of product quality compared to their Canadian counterparts. I recognize this is entirely subjective, but for years watching on any USA outlet was torture compared to what we had in Canada. These days, I choose to watch a USA feed and not simply because of this website. The American outlet had Kenny Albert and Ed Olczyk calling a game, whereas Rogers had John Bartlett and Garry Galley. This is a no-brainer for me.

The studio shows are where it gets really interesting. From the state’s perspective, it is clearly all about entertainment. Chelios, Gretzky, Carter, Bissonette, Tocchet etc. Putting in a little bit of fun by adding in some Charles Barkley makes it “I have to keep watching to see what may happen next.”. On the flip side, it’s Roger’s panel. They certainly provide a level of sophisticated information that you aren’t getting on the other side of the border, that’s for sure. The number one (rhetorical) question I get asked by people in the industry is why are they utilizing the number one “insider” Friedman on playoff intermission panels when clearly the discussion is about what went on in the game being played?” In other words, why not save Elliotte for segments about areas where he clearly excels as opposed to the x’s and o’s of what just went on during that period?

“We don’t want to hit people over the head,” Sam Nasrawi, senior director of content for Sportsnet, told Steve McAllister of The Parleh, a sports weekly newsletter. “Our market isn’t hardcore bettors. This is an opportunity to reach out to sports fans and slowly educate them on betting.”

That quote from today’s Globe and Mail in, an excellent article by Roy McGregor on the force-feeding of gambling content during NHL playoffs in Canada right now.

Sports gambling is the glowing puck of the year 2022. It’s the biggest difference between watching sports in the USA and Canada right now. It seems that the NHL in Canada is 100% focused on gambling. TV, Social Media, marketing, and ads have gone all-in on betting. It’s much more subtle here in the USA.

What I don’t get is that the actions, at least on Sportsnet playoff games do not match Sam’s words at all. The intermission segments have done literally nothing to teach anyone anything about gambling at all. To be fair, I think that’s where they actually could create fun content. Cabbie would be really good at it. To the expert gambler (who they claim they are not going after) the content would be annoying, but why not teach the regular hockey watcher what all the odds mean, how smart gamblers (if that isn’t an oxymoron) play, what a parley or a teaser are and more. Instead, they jump right into odds and lines with little foundation or explanation at all.

One has to wonder why the folks at Sportsnet PR have been so quiet on the first-round playoff audiences thus far? The Twitter account is usually trumpeting out incredible data on how big the audiences are and I can’t help but believe these playoffs thus far have been off the charts so far for them. Viewership is down slightly in the USA, but it’s not an apples to apples comparison year over year as last year was on NBC:

“The first week of the Stanley Cup Playoffs averaged 672,000 viewers across ESPN, ESPN2, TNT, and TBS (28 games through Sunday), down 3% from the same number of games last year. Keep in mind that five of last year’s first 28 games aired on the NBC broadcast network. Excluding those NBC broadcast network games — including a post-Preakness window that topped the two million mark — viewership is up 35%.” that from here

AFTER POSTING I WAS SENT THIS:

Let’s cross all of our appendages and wish good thoughts to those who are unwell and associated with the Blue Jays broadcast team’s speedy recoveries.

I am paying subscriber for the Wall Street Journal, New York Times, Toronto Sun, Globe and Mail, Toronto Star, The Athletic, Spotify, Hulu, Comcast(including HBO & Showtime), Netflix, Hulu, Amazon, AppleTV, Paramount Plus and at times it STILL feels like there is nothing to watch, read or listen too.

With the Leafs in the playoffs, I dabble in the Fan am show. I am LOVING Kypreos and Bourne, I spot listen to OverDrive and Brunt with Ennis. Tell me, I can’t stand listening to Barker, where else does one get good Jay’s segments that are not over-the-top analytics?

Any minute I am told to expect to hear that the Ottawa Senators are for sale. Will someone in Ottawa want to buy them and keep them there?

The most damage being done to people getting jobs when they don’t deserve them is to the candidate themselves. This is so true in the world of sports broadcasting where time and time again people are being put on air in roles they just aren’t ready for. The big leagues are not the time to learn. Social media is a big, nasty place for reviews too. Let people earn their stripes and take their lumps.

I randomly ran into Darren Millard in Las Vegas who looks well after being in a cycling mishap. Get well soon Darren.

This past year I got to see pro sports in lots of new venues. Have to say that hockey in St. Louis and Pittsburgh are both at the top of my recommendations for arenas worth checking out. Baseball in Milwaukee is as well. On that note, Lady Gaga’s Jazz show in Las Vegas is top 5 shows I’ve ever seen. It’s a must-see for sure.

Count me as one who LOVED the end of Ozark’s. I think the writers did a great job. I won’t spoil anything and leave it there. Once again I got hooked on a cable show after one season only to have it get canceled. I swear I will never watch a new show again for that reason and yet here we are again. If you are a fan of Survivor this season has been amongst the best ever. I don’t like reality tv except for Shark Tank, which I watch religiously. Other shows I am watching? Tehran, Hacks, Better Call Saul.

NHL playoffs this year have totally sucked me in. The cost? Blue Jays baseball. Maybe it’s the little swoon the team is experiencing right now, but I am not watching as intently as I thought I would be as I am watching more non-Toronto NHL teams than I typically do in other years.

Flying without a mask is really, really weird. It would be like not going through metal detectors. Curious, are they telling fliers in Canada it is illegal to drink your own booze on planes on every flight as they do here in the USA?

Finally, multiple people tell me things are a little tense at the house that Ted built these days as Toronto, Calgary and Edmonton are about to play round 1 game 7’s. First, the potential snafu of the Shaw merger is a total disaster should things not go through. However, as far as this site is concerned, it’s the success of the Canadian teams in the playoffs that has the bean counters concerned right now. Everyone knew when Rogers cut Bell out of the NHL tv rights deal things would be really tight financially speaking. Obviously, no one would predict the struggles the teams have endured or the pandemic. However, multiple sources tell me that the deeper into the contract we go, the deeper into the playoffs the Canadian teams need to go for Rogers to make money on the deal. The Mendoza number this year I am told for Rogers is the Maple Leafs making it to the 3rd round.

Let’s hope for Rogers, Maple Leaf, Oilers and Flames everywhere that all three teams are alive and well after this weekend.